Testing devices are essential electro mechanic equipment in the scientific research and industrial production process. As there is demand for 360-degree rotary transmission, a compatible slip ring is needed. JINPAT Electronics, an established slip ring manufacturer based in China, has brought up numerous slip ring models to fill this gap. We are going to look into some practice case of slip rings for testing devices and equipment.

To begin with, let’s look at the RF Integrated electrical slip ring. This type of slip ring, as named, is a slip ring that transmit radio frequency signals. Besides, it integrates computer signals. This slip ring is applied in the terminal which are connected to the testing equipment that involves radio frequency signals. Typical slip ring models are LPT000-U2-HF01, LPT000-1002-U2-HF01 and LPT000-1002-U2-E3-HF02. These three are closely related in terms of structure and technology. They are independently developed and produced by JINPAT Electronics and have salient advantages over other similar slip ring products in case of VSWR, insertion loss, maximum rotating speed and life span. 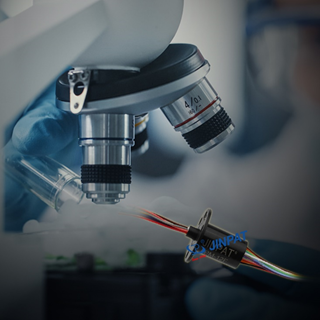 Generally speaking, the above mentioned slip rings for testing equipment belongs to JINPAT’s high-end line. They are applied in testing devices with medium/high added value. However, the often case is a more basic type of slip ring is sufficient for normal practice. JINPAT recommends a simpler solution—integrating an electrical slip ring with the signal slip ring. LPT012-0101-E3 through bore Ethernet slip ring is a good example. This slip ring integrates 1 Gigabit Ethernet signal channel and 1 1A power channel. The challenge in this slip ring is to attain a fine impedance matching. And JINPAT Electronics has nailed it.